How do turtles mate and how often do they mate?

Dr. Chan is a co-founder of TCS. She is a retired Professor who had spent more than 30 years studying marine turtles in the country.


Turtles mate with the male mounted on top of the female. The male turtle wraps his tail around the female’s in order to inseminate her. The penis is not exposed and is kept internal at other times. The mating position in marine turtles can last up to 8 hours!! This is probably the reason why some indigenous people prize the turtle penis as an aphrodisiac. In marine turtles, males are polygamous and will mate with multiple partners during the reproductive season. The female similarly can be inseminated by several males, confirmed by multiple paternity of hatchlings from within a single clutch of eggs.

← Previous: What is the lifespan of a turtle? Next: Are turtles nocturnal or diurnal? Do turtles sleep with their eyes open or closed? →
You may also like…

How do sea turtles eat jellyfish without getting stung?

If someone were to ask you what sea turtles eat, how would you answer? Do they eat small fishes? Or sea planktons? Are they herbivores or carnivores? Or perhaps they are omnivorous?

We’ve been hearing a lot about climate change and the negative effects that come along with it. But what is it? And what does this phenomenon mean for sea turtles? 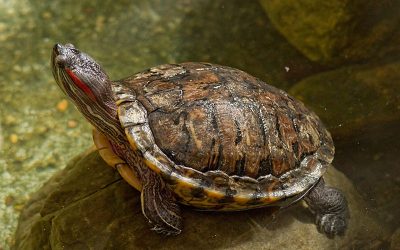 6 reasons you should NOT keep a pet turtle

We DO NOT encourage anybody to keep red-eared sliders, or any turtles, as pets, and these are the main reasons why.