How many species of turtles are there in Malaysia?

How many species of turtles are there in Malaysia?

The four species of sea turtles that nest on the beaches in Malaysia are:

Of the 18 species of freshwater turtles and tortoises found in Malaysia, we at the Turtle Conservation Centre (TCC) are currently involved in the research and conservation of two species — the river terrapin (Batagur affinis) and painted terrapin (Batagur borneoensis) — but as we expand the TCC, we will also be working on other species as well. To learn more about the projects that we carry out, please visit the Setiu River Terrapin Recovery Project page.

Why are green turtles so-called, but they are not green in colour?

The common name of green turtle is derived not from any particular green external coloration of the turtle. Instead, they are so-called due to the their cartilage and the fat deposits around their internal organs, which is greenish in colour, because they feed on seagrasses and seaweeds. Green turtles are either black-brown or greenish yellow in colour.

What is the estimated number of leatherback turtles in the world?

The population of leatherbacks, the oldest and largest sea turtles, has declined an estimated 80% in the past three decades and in 2007, it was believed that there were only about 40,000 leatherback turtles left in the world (only 5,000 in the Pacific) due to a variety of threats (Source: Canada.com).

← Previous: In the hours leading up to Turtle Blogathon Next: How long have turtles been on earth? How did they look like in prehistoric time? →
You may also like… 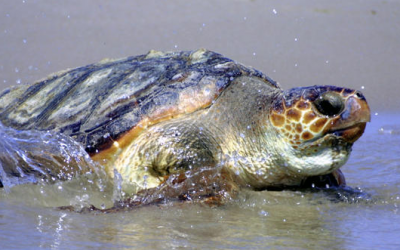 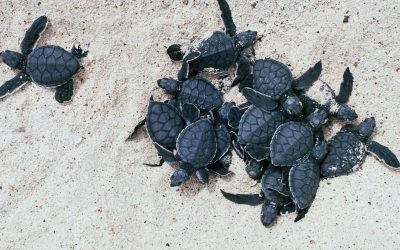